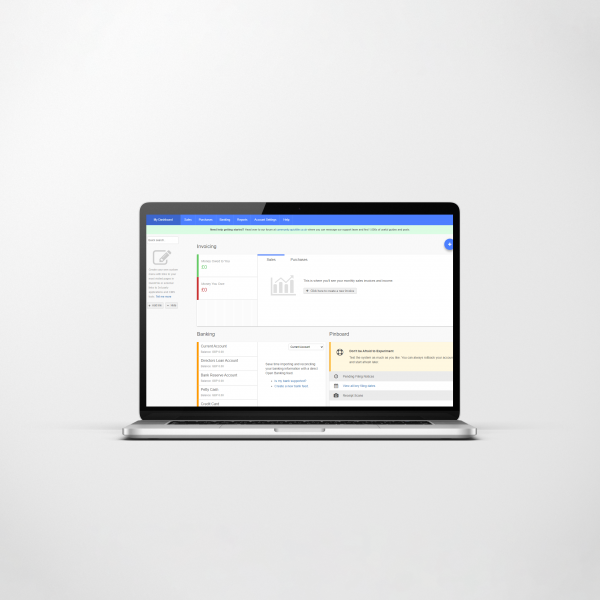 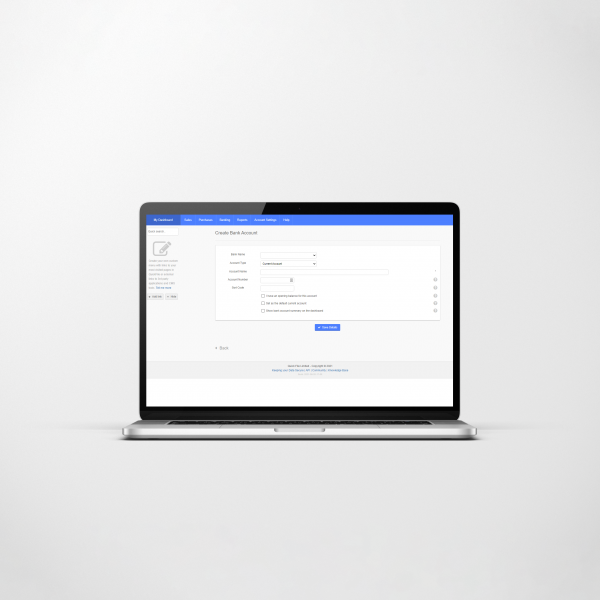 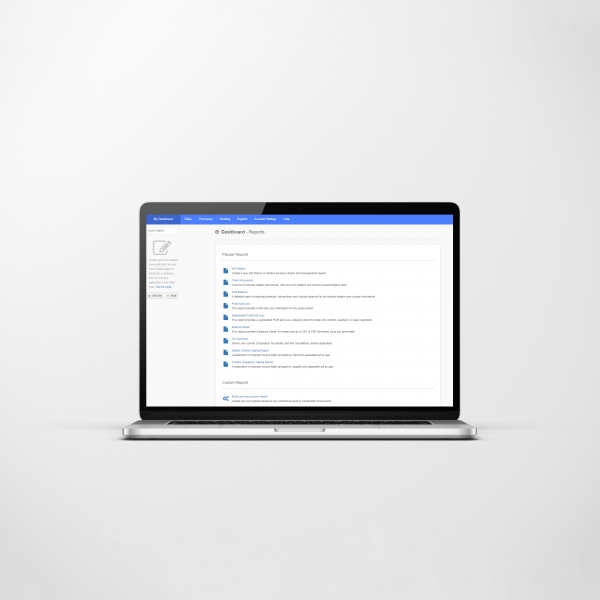 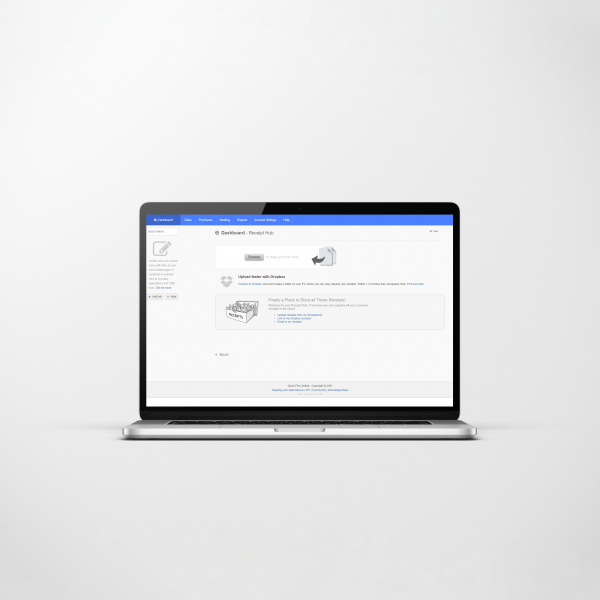 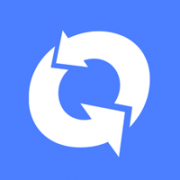 QuickFile can be confusing to get used to, with massive menu options and time-consuming processes for doing things. There are lots of opportunities to make mistakes without realising, even for users who are fairly experienced. For example, entering transaction references or project tags manually is time confusing, and means that you run the risk of entering them slightly differently each time.

Whilst the price isn't too bad (the free tier includes most of the features that smaller businesses will need), it’s worth mentioning that the paid packages (£45 for a year) only include VAT bridging software. There's also no support available, no matter how much you pay, which can make things tricky if you run into problems!

Visiting the QuickFile website is a bit of a step-back, with their mediocre design not comparing too favourably against their competitors. From there, even the signup process had its moments of mystery, including a request to provide a client area which, even though it wasn’t essential, somehow… was.

You’ll probably want to bookmark the link that they send you, otherwise you’ll need to visit the website, generate an email, and click the link from there each time you want to login.

The dashboard is fairly standard, and interestingly includes a disclaimer that you can experiment with the system as much as you like, and can roll back the account later.

The interface isn’t that pretty, but it’s fairly well explained, which is just as well because the menus do contain an awful lot of options.

We did notice some methods and processes in QuickFile which seem a bit awkward. For instance, creating an invoice gives you the option of creating invoices for objects or for time – it just seemed a bit unnecessary, especially when there’s an inventory feature.

QuickFile does have some other strange quirks, too. There’s a projects feature, which has its own reporting function, but nowhere to create, view, and manage your projects and settings.

Speaking of reports, some of the options included in that menu probably don’t really belong there. For instance, the ‘Companies House’ report is actually an integration for searching the register.

Entering transactions manually is a bit hit and miss, and there’s a fairly high risk of errors. For instance, having to enter the reference for a transaction, rather than having some options to choose from.

Some good and bad points in this category. We noted that the knowledge base help content seemed out of date, and didn’t reflect some of the menus and options available in QuickFile.

The software speed is very fast indeed, and scores well for load times and so on (though with an interface this bleak, we’d be worried if it were slow). Using the software is a bit slow, though, which is a massive shame. QuickFile does include bank feeds, though for a fairly limited number of banking institutions.

Creating invoices can be slow, and there’s a high margin for error, particularly from choosing project tags. There aren’t options to choose from, so you’ll need to remember what you’ve used before.

QuickFile does offer a decent number of features, but finding them isn’t necessarily as straightforward as it should be. We’ve mentioned the project tagging already, and that there isn’t anywhere to actually review projects other than on a reporting basis.

There’s nothing that really sets them apart, though the range of integrations is pretty good, including a payroll app, and a currency converter (though we’d prefer to see a native solution to this).

There are a lot of reports and a limited ability to add customised reports.

The reports in general do exactly what they say on the tin, but they could be laid out in a more user-friendly way. The VAT return is reasonable, but you have to export the workings rather than just viewing them on screen.

QuickFile is made for the UK and does support cash accounting and the flat rate scheme. However, it does not handle the switch between accruals and cash accounting, which could catch a lot of people out! We also noticed that we registered for VAT within the accounting software, after a transaction had been entered and did not receive a warning of any kind. We thought this was a bit loose and open for potential errors.

There are some guides and a knowledge base, along with a community forum, but no direct support from QuickFile, even for paid tiers.

Well, QuickFile offers free packages which all seem to do the same thing, with the only difference being the number of transactions that you're allowed. You can pay £45 to get rid of adverts.


What level of bookkeeping knowledge will I need?

This software has been developed with the input of accountants and you can tell. You would have to have some understanding and bookkeeping experience to ensure you’re producing accurate figures; it does take a little bit of getting used to.

The bits we liked

The ability for customers to login and see their invoices was a nice feature that looked easy to set up. It also allowed for that area to be customised with logos etc.

We also liked the fact that accountants had an input into the development which meant that you could see a full nominal ledger which is missing from a lot of accounting software packages.

Awkward methods such as the 2 or 3 step processes for entering a transaction and the poor handling of part payments against invoices.

My name is Glenn, I am one of the co-founders of QuickFile. I just want to address a few points, as the review seems to have quite a few inaccuracies. “Creating an invoice and assigning it to a customer account was a bit tricky and obscure” – How so? On the new invoice screen you just enter the name of the client, the system will suggest any existing clients or create a new one on the fly. “Part payments for customer/supplier invoices was not supported” – We have supported this from day one. Just preview the invoice, click to log… Read more »

Doesn’t seem to be free any more, you have to pay £45+vat per year now.
http://community.quickfile.co.uk/t/important-changes-affecting-large-and-extra-large-accounts/8260

The user rating (4 out of 5 stars) compared to this website’s apparent ‘rating’ is more accurate. I’ve just signed up for QuickFile now as a sole trader, not a big company and it’s absolutely spot on for my needs.

I have been looking for Batch Invoicing feature as Glenn mentioned it’s been there since 2012. I couldn’t find it on web interface. Has it been removed from the site recently?

For what it’s worth, I too think the star rating assigned to Quickfile by this review is far too low. I arrived at Quickfile having become more than a little frustrated with Inuit’s dubious practice of locking customers in to new services and then jacking up the price (in my case to a ridiculous £720 pa for two small technology start-ups each with a handful of employees). By contrast Quickfile is basically free – although I am so pleased with it’s capabilities I will buy a couple of premium accounts as a token of my gratitude to its creators. In… Read more »